On my way to iringa and stopped for some lunch in Mikumi national park. Sitting watching loads of animals grassing on the plains. (zebra, impala, buffalo and elephants)
Posted by Marcus Duveskog at 12:39 1 comment: 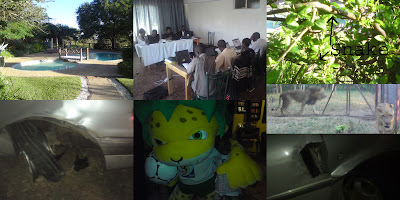 Went to Lusaka for a few days to teach the group of students taking the online VISCOS studies at University of Eastern Finland. Was a couple of intensive day filled with teaching and preparations for teaching. Last afternoon I was taken to a game farm/lodge outside of Lusaka. It was a very nice place and had a relaxing afternoon watching wild animals and having a swim in the pool. I went there with Ulla the Finnish project manager for the project I visited and Nicolas the son of the local coordinator. We traveled by taxi driven by Mr Mizek who has always been the one taking me around while in Lusaka. On the way back from the farm it was already dark and we were traveling on the good road back to Lusaka. I started to feel uncomfortable as driver seemed to have problems positioning the car properly on the road and asked him if he was tired or why he kept crossing the center line. He claimed to be ok and no reason for worries. Few minutes later as a car was approaching in high speed from opposite direction he once again crossed the line and we had an accident. Luckily it was not a head on collision and only the sides collided and we lost one tire. Now car was placed in middle of the road as a lorry was approaching in high speed I got out of a car and expected the worst, did not know which direction to run as did not know how lorry would act. Luckily it managed to stop before hitting the car. People showed up and helped to lift the car out of the road to avoid new accidents taking place. We had to call in for a new transport from Lusaka and in that car was also little Nicolas father. On the way they had to stop for a police check point and as they were talking to the police officers their car was hit by a lorry. We received the news and managed to get a lift to the point of their accident. It was a terrible scene a lorry was laying across the road and couple of cars were totally smashed. Luckily at least the persons in the car that came for us had survived with only minor injuries. It was a scary evening and after coming back to lodge I felt grateful still being alive. I have been given some more time on this earth and happy for that :-)
Posted by Marcus Duveskog at 22:49 2 comments: 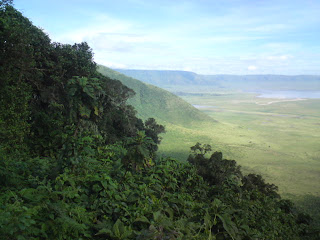 finally yesterday car was somehow sorted out after changing cylinder head and sorting out some heating problems. Yesterday me, Heidi and Ebenezer visited lake Manyara national park and managed to see tree climbing lions. Today we visited one of the seven wonders of the world the famous Ngorongoro crater. We were amazed of the beautiful sceneries and the quantity of wild life. Once again we were lucky to see lions that had climbed a tree. The roads were at points deep mud river but we were lucky enough not to get stuck. Now heading to see some of Ebens relatives who are living a traditional Masai life. 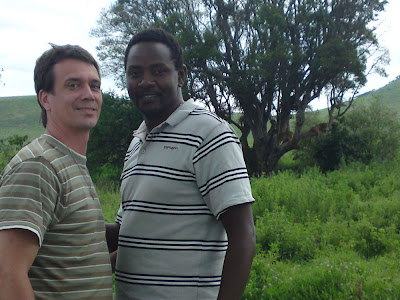 Take a look in the tree behind Ebenezer and me!
Pay special attention to the pale Masai on the right side :)
Posted by Marcus Duveskog at 16:08 1 comment: 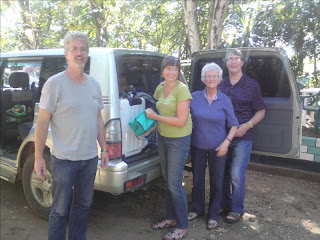 By surprise I met my cousin Daniella's husbands family in Same. Cheered up the day while waiting for reports on how car is doing. Have some hope of being able to continue journey today.
Posted by Marcus Duveskog at 14:24 No comments: 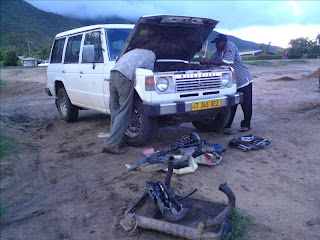 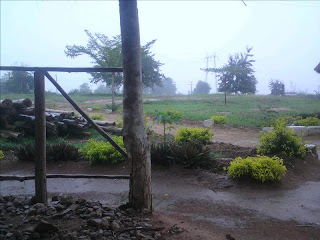 During my drive to Dar my car suddenly gave up on me. Annoying as i spent money on it to have it in good shape for easter holidays. Now sitting under shelter in the rain in the middle of nowhere Wondering what to do. Hoping to get towed to Dar or at least to a garage. In few hours Heidi is arriving at airport and will not be able to meet her there. Guess sometimes you just have to bite the sour apple (swedish saying)
Posted by Marcus Duveskog at 14:35 No comments: