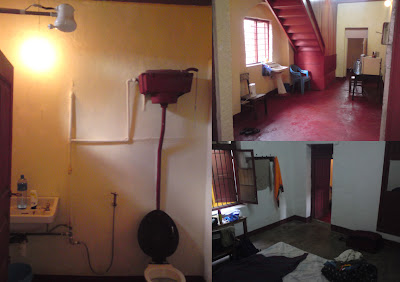 Took me some time to find a place where to stay and spend first week in hotel. My friend Walid set me up in one apartment behind his shop. Some renovation work is made to make the place more comfortable and nicer, for instance toilet and floor was painted and is finally starting to dry up so that I can walk on it. For short term the arrangement works fine with me. Place is just in the middle of city center which can make the place a bit noisy at times. Especially the Friday morning prayers at the nearby mosque kept me awake from 5 in the morning.
Posted by Marcus Duveskog at 11:27 1 comment: 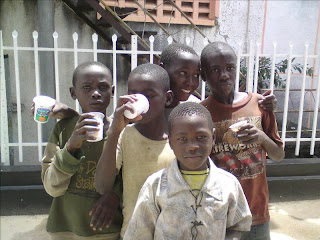 Often the street kids come with their open hands and beg for money. But in many cases you do not really help them by giving them money as it might be used for glue or other drugs that help them forget the hunger and tough conditions. This time however they asked for milk and advised me where i could buy it, inspired by my little sister who was so touched by the children in Turkana who begged for water, I decided to get them some yoghurt which was what they actually wanted. It is difficult to ignore the kids cry for help but how to actually help them? Supporting their begging by falling for their hungry looks might just stimulate the habit of begging. Some street kids in Iringa makes boxes for storing coins that you can by from them, i have bought those but only to support that they are trying to do business instead of begging. There are many NGOs that do a great work for street kids but having some ideas in mind myself that might be my future passion, but lets see first i need to focus on finalizing my forever PhD studies.
Posted by Marcus Duveskog at 08:44 1 comment:

What is new in Iringa 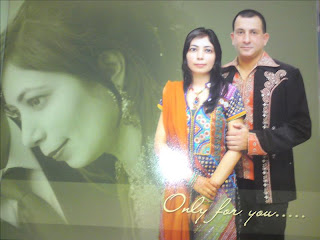 Not much it seems except that Walid had got married. Met his beautiful wife Samira and they seem happy together. So i am very happy for them.
Posted by Marcus Duveskog at 17:19 No comments: 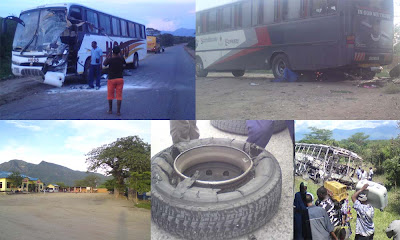 I remember a time when the new bus company Scandinavia did some serious efforts to create a company that prioritized comfort and safety. Whenever I needed to take a bus I have always tried to use them. By time the quality of the buses have gone worse and worse and after my trip yesterday I am not sure I will use them again. One of the earlier Scandinavian buses going from Dar to Iringa took fire and completely burned out. We arrived after the fire, luckily noone got badly injured, some Finnish person had hurt his leg jumping out the window and some people got some small cuts. Our half full bus filled up with stranded passengers where many had lost all their luggage in the fire. After some time when I was just about to fall asleep I heard an explossion and looked out the window and could see some smoke, my first thought was that our bus had also taken fire. Luckily i was only a tire that exploded, the driver who realized is was the tire wanted to continue driving as the bus had double tires. The passangers who had experienced their first bus taking fire demanded the the driver to eventually stop and at least have a look at the damage as there was strange sounds. Eventually the bus driver stopped and almost started a fight with complaining passengers. Driver who was chewing stuff seemed to have lost his mind for a while. The tire was changed and we continued the journey but at one of the regular stops wires from the tires that had jammed the suspension had to be removed which ended up taking quite a bit of time. Few kilometers later a bus had just had a frontal collision with a lorry and we stopped to check it out but luckily it seemed like noone had got badly injured. Arrived in Iringa very late but happy that I survived yet another adventures bus trip. Scandinavia have lost my credibility as this is not the first time I have experienced problems with their buses and drivers.
Posted by Marcus Duveskog at 13:44 3 comments: 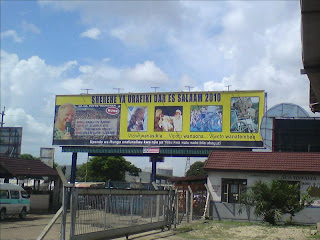 Sitting and waiting for the bus to Iringa. Suddenly i saw a familiar face on the big sign board. Isn't that Göran's old tennis partner Peter junggren and indeed it is. Seems i missed his 'crusade' however :)
Posted by Marcus Duveskog at 09:35 No comments:

View form Heidi's apartment in Strand. Short visit in the Cape on my way to Tanzania.
Posted by Marcus Duveskog at 16:45 1 comment: 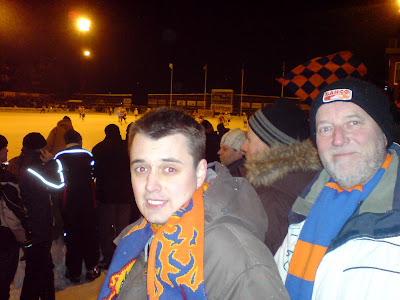 During my short visit in Bollnäs I managed to experience my bandy team qualifying for semi finals by beating the neighbouring rivals Broberg with 5-2. My father and brother in the picture. Now 30 hours of traveling ahead of me....
Posted by Marcus Duveskog at 08:45 No comments: